In part 1 of this series on interpreting SCATT results I talked about individual traces and a little bit about how to read them. Much of that is deduction really; working out what has evidently gone wrong from the evidence that the shape of the trace gives you. The focus of that article is on individual shots. By way of contrast, I find the numeric aspect of SCATT to be more focussed on groups of shots, and once you're into the domain of populations of numbers you are inevitably going to run into statistics; however in this article I'm going to ignore that as much as possible.

What I look at
SCATT tells you a massive amount of stuff, but I pretty much ignore everything except for four numbers. If we reduce shooting technique to "point the rifle in the middle, hold it very still and squeeze the trigger gently" then these four numbers give us a pretty good understanding of the three components of shooting and the overall quality of the result.
By doing lots of SCATT and keeping an eye on these numbers, you can spot trends as they develop, work out whether you're doing well or not, and make meaningful comparisons of equipment, positions and techniques.

Individual Shot Numbers
The individual shot numbers are located in the panel on the left-hand side of the screen underneath the miniature diagram which shows all of the shots. 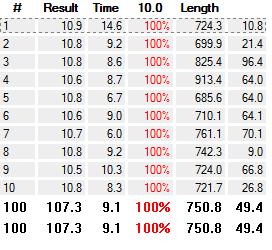 Result - Score of the shot. Ditto.

Time - Time taken between the trace entering the target zone and the shot being released. In the panel above, I'm taking too long. Once settled you should take between 2 and 8 seconds to get the shot away. Add a couple of seconds for transit from the edge of the target onto the bullseye and you should be getting them away in well under 10 seconds.

(Trace) Length - The distance travelled by the trace on the target in the final second measured in millimetres. Roughly correlates with how still you can hold the rifle. Lower trace length = smaller, slower wobble. On a 1000 yard target under 1000 is OK, under 800 is good, under 700 great.

10.0 - The percentage of the time that the trace is in the 10 ring. As I often don't bother to centre the group (repeat after me, SCATT is not a v-bull machine) I pretty much ignore this number.

Shot Release - The final column on the right-hand side, which seems to not have a label. The distance in millimetres between the centre of your wobble and where the shot ends up. This is a function of how fast the rifle is moving when the shot is released, which is related to position and quality of trigger release. Lower number = better hold and release. On a 1000 yards target 70 is OK, under 50 is good, under 40 is great.

NB - You can only really compare trace length and shot release values for the same distances,

Group Numbers
The group numbers are shown in the right-hand pane if you click on the "Info" button in the menu lower ribbon at the top of the screen (underneath the "Start" button.") 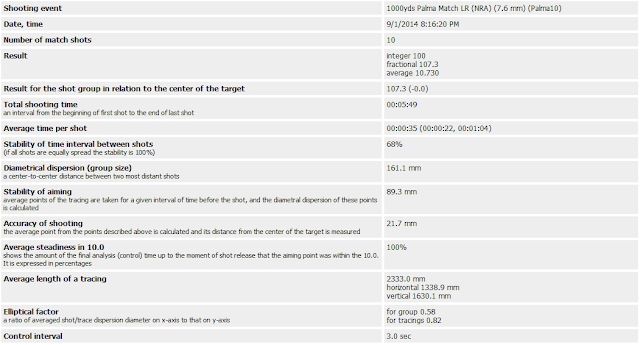 I'm going to skip most of the crap at the top because it's either self-evident or irrelevant and get straight to...

Diametrical dispersion (group size) - Self-explanatory but a really useful measure of your technique as a whole. I generally use SCATT to shoot groups without changing my sights, so this is a useful measure of how well I'm shooting.

Stability of Aiming - Incredibly useful. How consistently you are pointing the rifle in the middle. A function of the repeatability of your position, in particular your NPA and sight alignment.

Accuracy of Shooting - The distance from the centre of your group to the centre of the target. As I often don't bother to centre groups as I'm not using SCATT to try and get a score, I pretty much ignore this.

Average Steadiness in 10 - The average percentage of trace in the 10 ring for all shots.

Average Length of a Tracing - The average trace length for all shots.

Elliptical Factor - Measures how round your groups are. I ignore this as it's not terribly meaningful for fewer than 20+ shots, provided the group isn't really strung out.

Control Interval - The duration used for the calculation of trace lengths.

I don't tend to find individual traces that enlightening any more because under the controlled conditions of SCATT training I don't fire that many out and out bad shots, and I usually know when I've done it. It's in the warm with no wind on a perfectly consistent surface and with perfectly consistent lighting. As a result, the use of statistics on lots and lots of shots tends to be the only real way to disentangle fact from mere happenstance. In the next post of this series, I'll talk about using SCATT to compare equipment, techniques and positions.
Posted by Gaz Morris at 21:47