The effect of heart rate on shooting - Part 1

Quite a long time ago now, I noticed that the beating of my heart appeared to slow when I was in the aim. I remarked as such to a medically-qualified friend, who replied that he was not in the least surprised as it is known that it is possible to consciously slow heart rate*. Having recently bought myself a Garmin 225 GPS watch combined with a heart rate monitor as a training aid for running, I decided that it would be interesting to see what results I got when measuring my heart rate during a SCATT session.

The Effect of Heartbeats on Aim
It's logical that heart rate (and possibly strength of heartbeat) will have an effect on aim. The hydrostatic pressure of the surge of blood around the body will disturb the fine aiming required to shoot a rifle accurately, either as it passes through the organs of the body or through the major blood vessels of the upper limb**. Indeed, the disturbance caused by heartbeats can be observed using a SCATT as is shown in the diagram below.

The Measurement of Heart Rate
I bought my watch primarily for running, as my pace judgement isn't great and this is critically-important when running long distances. Go out 15 seconds per mile too fast in a marathon and the last 10k is likely to be deeply unpleasant, not to mention very slow. The watch that I bought also has an integrated heart monitor, which works by detecting colour changes under the skin of your wrist when bloodflow increases. Once an activity is recorded, the data can be viewed through the Garmin website or through a 3rd party app like Strava. The plan is simple, start the heart rate monitor and then correlate the heart rate output with shots from SCATT.


Experimental Conditions
I fired a good 10 shot group using my SCATT wearing the heart monitor. I was careful to try and do this as close to normally as I was able using my normal kit and technique. I switched on the heart rate monitor after warming up, but before I got down to shoot.


Heart rate monitor results
The heart rate trace yielded some great results and demonstrated exactly the effect I wanted to observe; however it also yielded something rather unexpected. Given that my resting heart rate is somewhere around 50bpm*** I was expecting to see my heart rate decrease to around that level or possibly lower while in the aim, and it to increase moderately when back out of the aim to, say 90bpm. The raw graph looks not dissimilar to this expectation.


When I superimposed the shots on the graph, as is shown below and then actually looked at the specific heart rate numbers I was rather surprised to see that the average during shots was 60-65bpm and between shots it went as high as 130-135bpm,which is approximately the same as when I run at a 9 minute mile pace on a flat course. 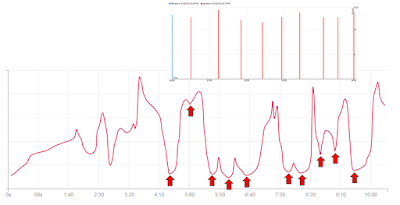 Preliminary conclusions
It is clear from the result that I am subconsciously controlling my heartbeat when doing SCATT sessions; however the range of heart rates was much broader than was expected. In the next article, I'll have a crack at explaining what might account for this variation and whether there's any way of using it to our advantage.

* Vid. http://www.ncbi.nlm.nih.gov/pubmed/22744827
** It is worth noting at this point that at least two aspects of shooting technique are aimed at diminishing the effect of heartbeats on aim: The modified Estonian position is supposed to reduce the effect of bloodflow through your guts on aim, and correct positioning of the sling on the upper arm reduces disturbance from the brachial artery.
** Average for a 40 year-old man is something like 70bpm according to http://www.topendsports.com/testing/heart-rate-resting-chart.htm but I've been running for few years now, which has had a significant effect.
Posted by Gaz Morris at 10:21